The standardized values for paper sizes known today as DIN formats were first defined by the German Institute for Standardization (DIN) on August 18, 1922, in the DIN standard DIN 476. They classify the ratio between the width and height of a sheet of paper, which is the same for all sheet sizes, namely 1: √2.

Only with this ratio does the next smaller sheet created by folding centrally over the long side remain geometrically similar to the original sheet.

This aspect ratio, on which the DIN standards are based, goes back historically to the 18th century and was already specified by Georg Christoph Lichtenberg in 1786. Forgotten for a long time, it was taken up again in 1910 by Wilhelm Ostwald and subsequently disseminated by Walter Porstmann and enforced as a DIN standard in 1922.

With its specifications on the A and B series, the German standard served as the basis for the European and international equivalent EN ISO 216, which in turn has been adapted in almost all countries. The only differences are usually in the permitted tolerances. As a purely national standard, DIN 476-2:2008-02 Paper end sizes – C series is still valid.

Title: Writing paper and special groups of printing material – end formats – A‐ and B‐series and marking of machine running direction

There are four series (A and B according to ISO and DIN, C and the original D according to DIN), each of which is divided into eleven classes numbered in descending order of size from 0 to 10. 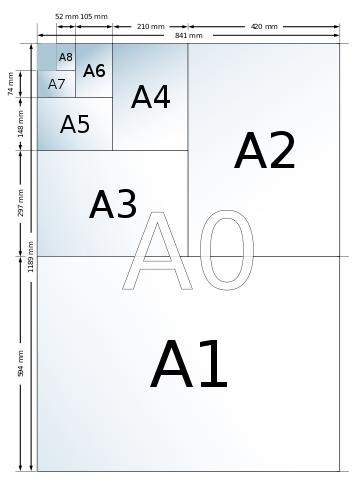 The book format indicates how many sheets a book printer can create from one sheet of [...]

The term folio derives from the Latin word "folium" (leaf) and refers to a traditional book [...]

Under the unofficial name A4+ (A4 plus), there is an oversize format based on the DIN [...]

A newspaper format describes the standardized dimensions of a newspaper that has not been opened, specified [...]